45 Pennsylvania Univ. Glee Club members, after visiting Shanghai, Hong Kong, Macau, and Taipei, arrived at Haneda Airport very early morning (4:25 a.m.) on June 1.  Then taking a bus, they went to a hostel in Shinjuku and soon after taking a short nap, they moved to ICU to have the joint concet with ICU Glee Club.

Joint Concert with ICU Glee Club at ICU Chapel from 17:00 on June 1 (Mitaka)

It was indeed a stunning performance by both Penn Glee Club and ICU Glee Club. This concert was planned and materialized thanks to Dr. Hibiya, GR88, President of ICU, who introduced ICU Glee Club and booked a wonderful ICU Chapel for them.

ICU Glee Club first went on stage and sang "Super Flumina Babilonia" and then other five songs including two Japanese chorus numbers.  Then, Penn Glee Club started singing Brothers, Sing On! and had series of their fantastic numbers incluidng "Ue O Muite Aruko (上を向いて歩こう)".  On the 3rd stage, Penn Glee Club was up on the stage with ICU Glee Club and sang "Soon tt Will Be Done" (Spirituals) and "Os Justi" (Bruckner) with maestoso sounds, and gave encore of "Ride the Chariot". 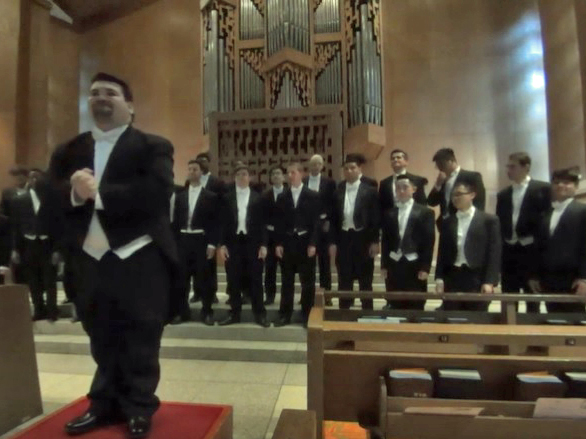 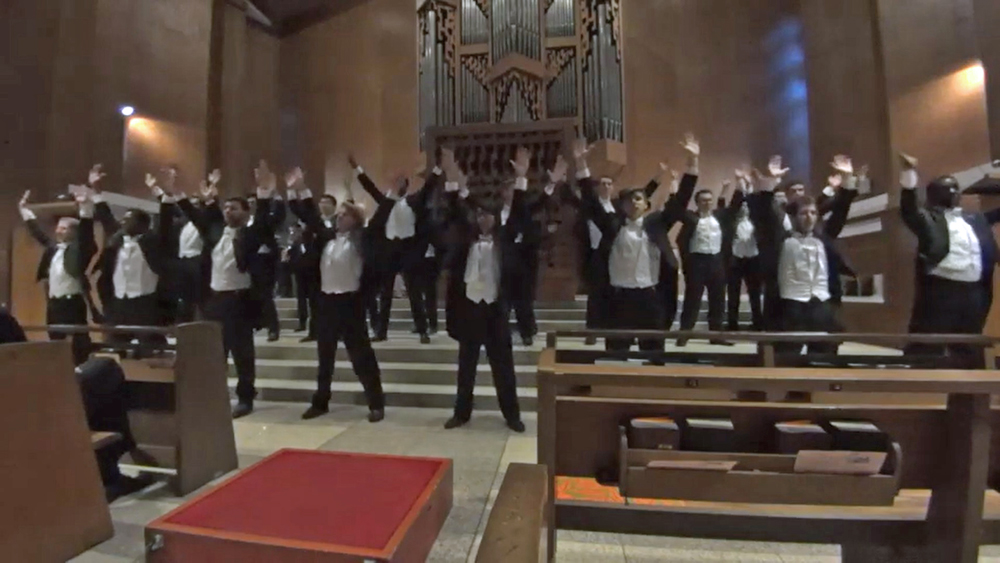 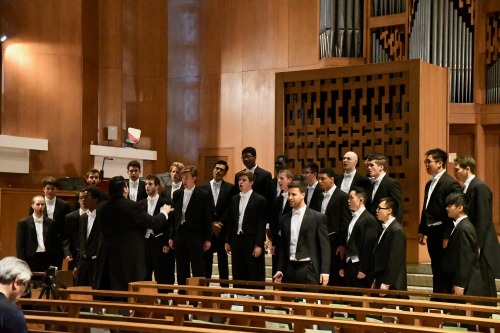 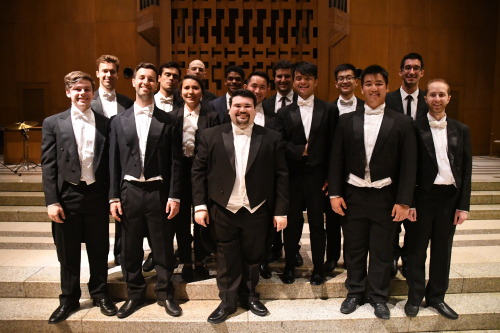 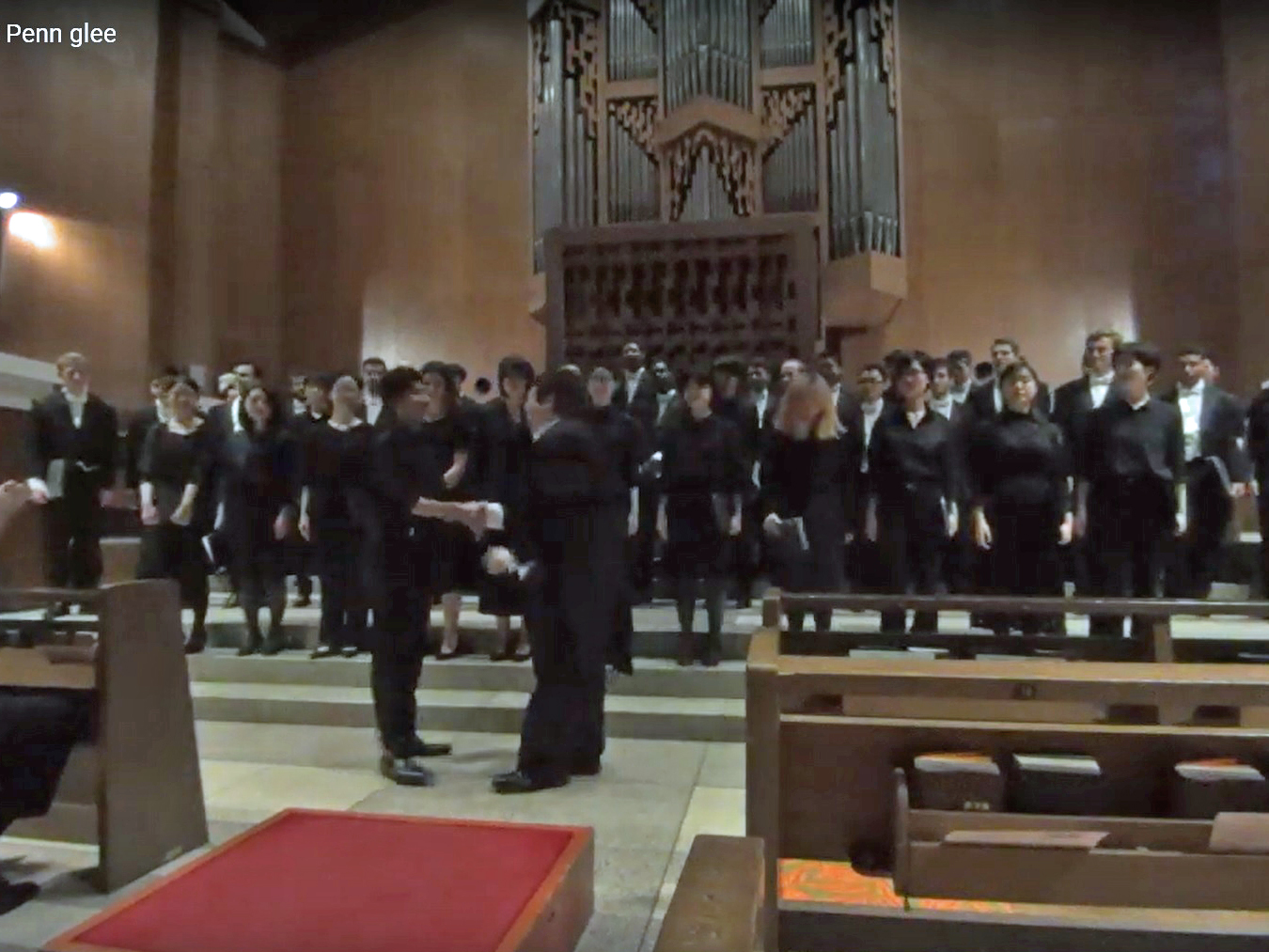 Joint stage; Ride the Chariot as an encore

Dr. Hibiya kindly hosted a recpetion after the concert at ICU's beautiful cafeteria and both students interacted one another over nice foods. 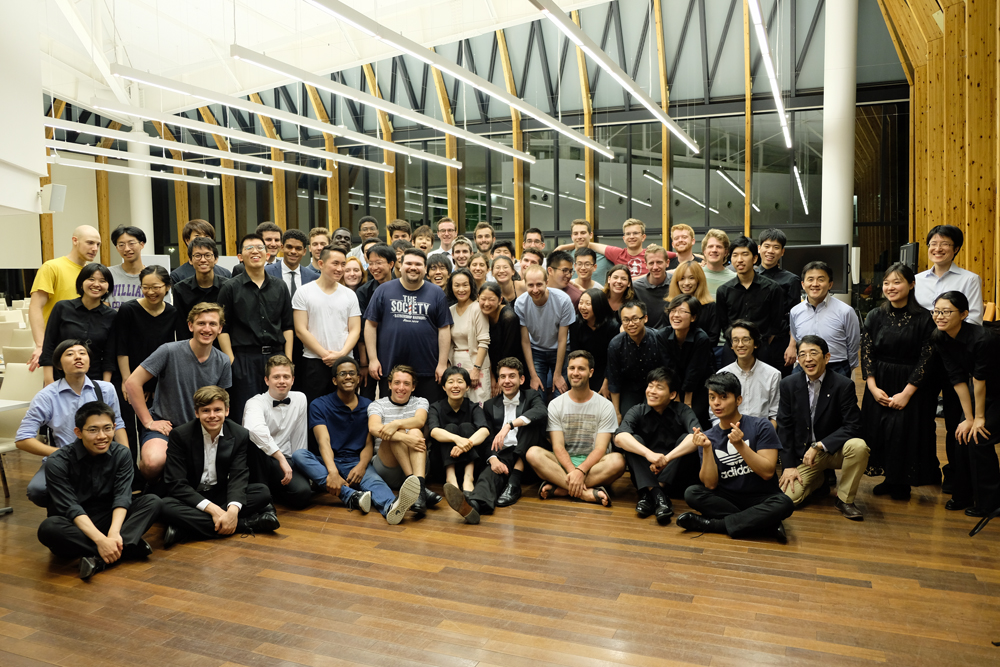 On Sunday afternoon, at the Mecca for all Nissan fans, many families and shoppers are passing on the pedestrian deck.  They stop by to see Penn Glee Concert.  Nissan Global HQ Gallery invited Penn Glee Club as part of their events, "Month of Music", for public audience and visitors to enjoy music in casual setting.  It was held three times; 13:00 - 13:30, 14:30 - 15:00, and 16:00 - 16:30.   Audience including kids, families, couples, senior citizens, are all excited by Penn Glee's stunning performance. 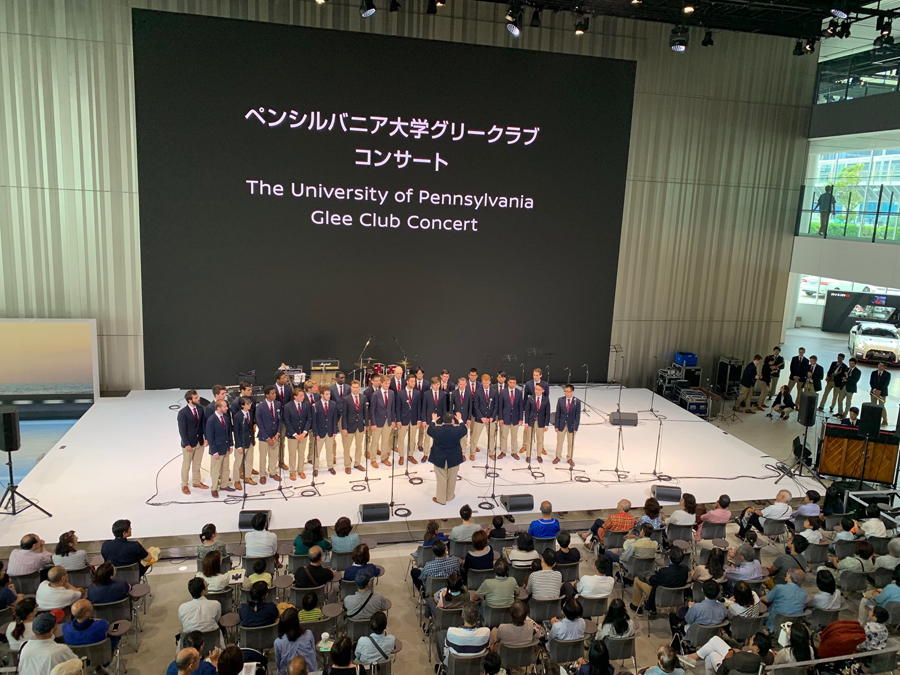 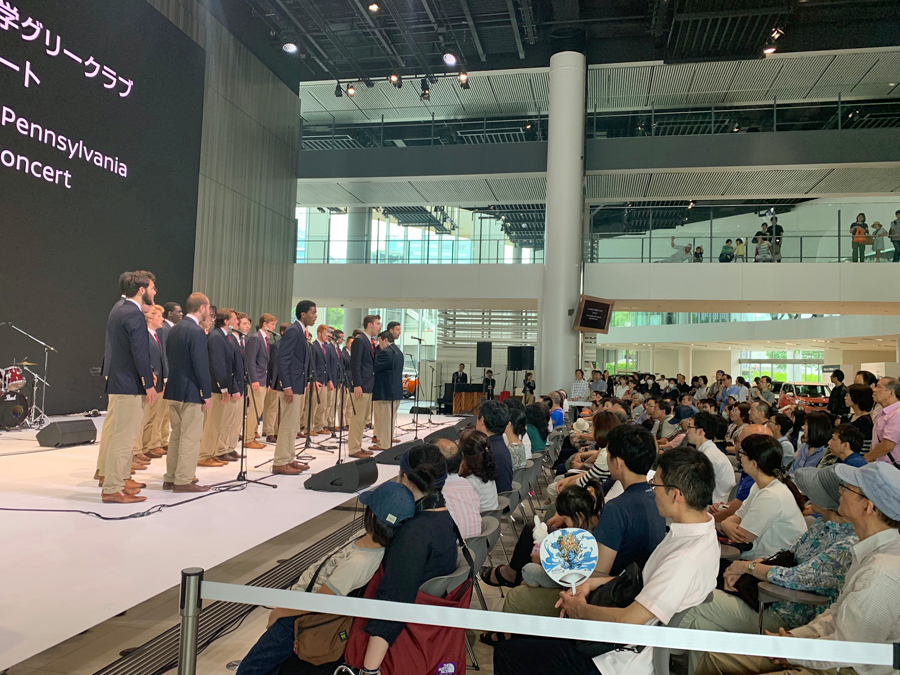 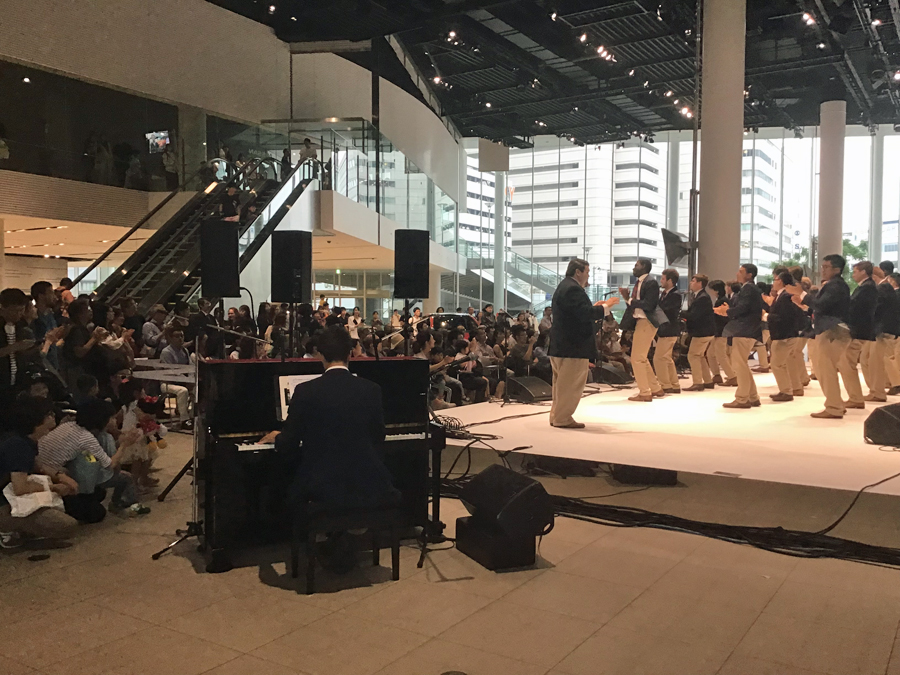 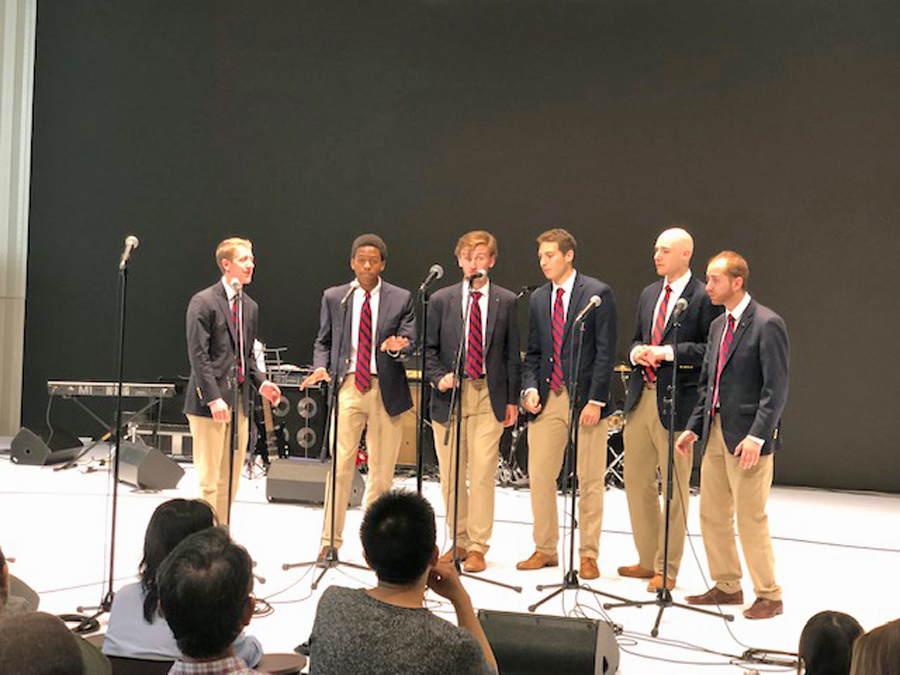 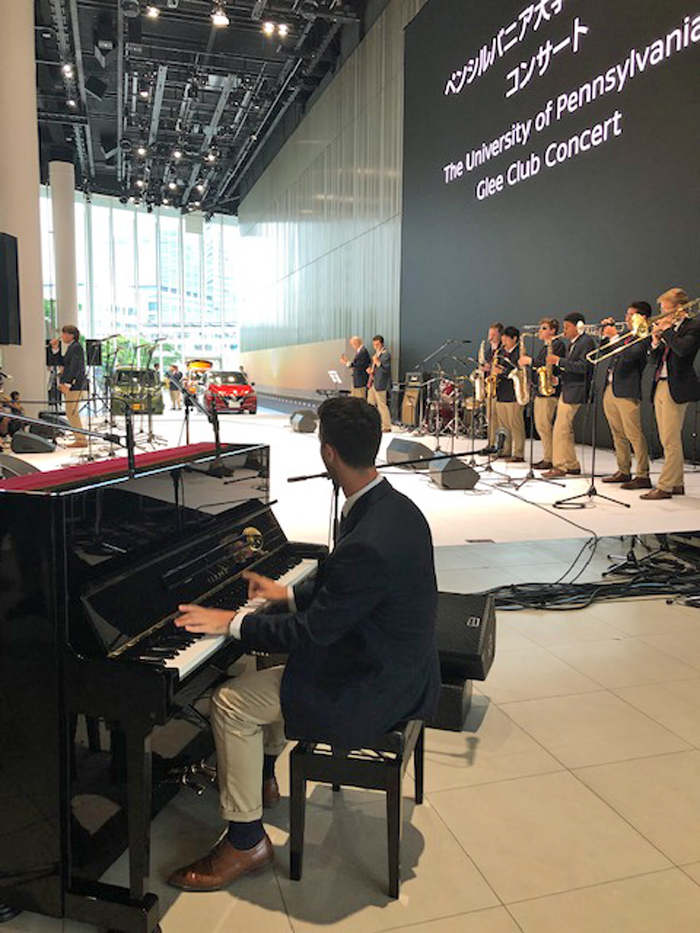 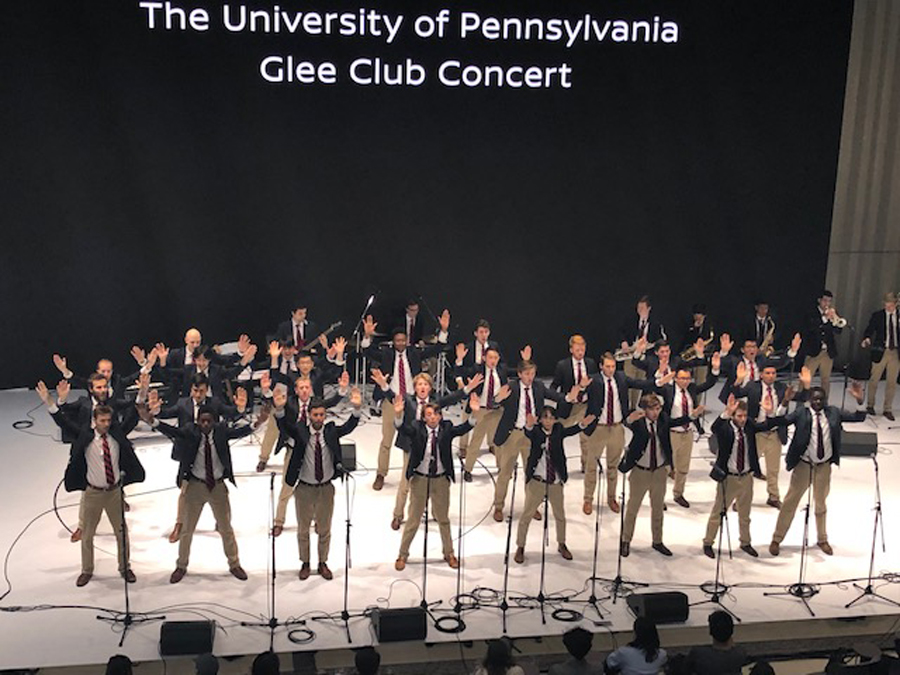 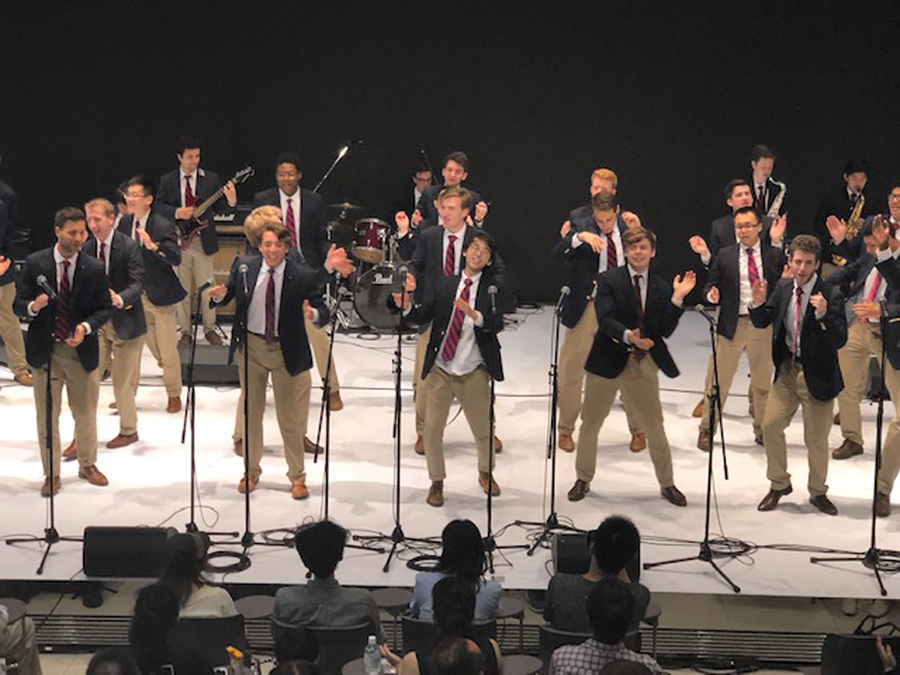 This remarkable joint concert was actualized by the leadership of Yoichi Kumazaki, alumnus of Waseda Univ. Glee Club.  Sam Orlin, Senior, Business Manager of Penn Glee, contacted him last December knowing Kumazaki-san carried Harvard Glee Club forward to success of the joint concert with Waseda Univ. Glee Club in January 2017.   Sam strongly conveyed his strong passion to interact with Japanese male choirs and their members and Kumazaki-san was firmly committed to making this happen whatever it takes. 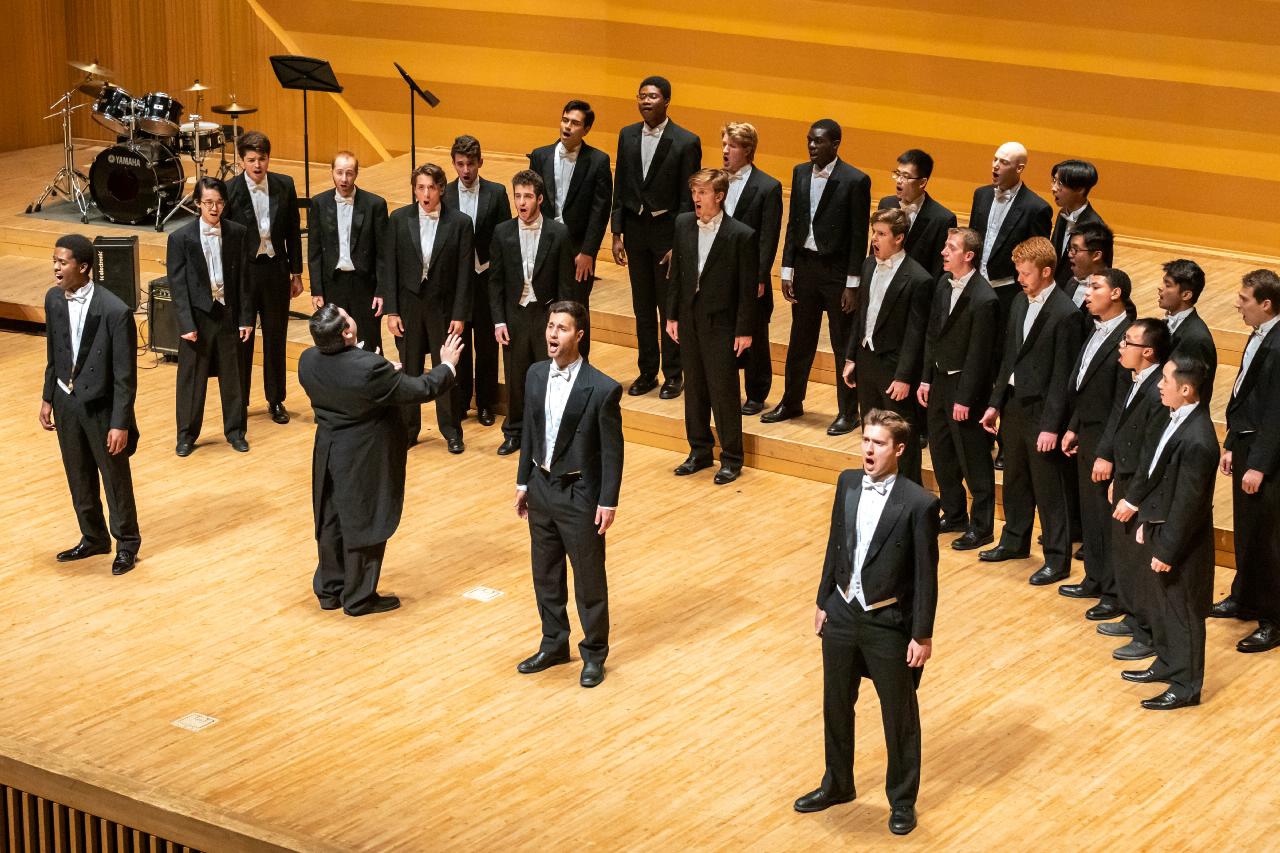 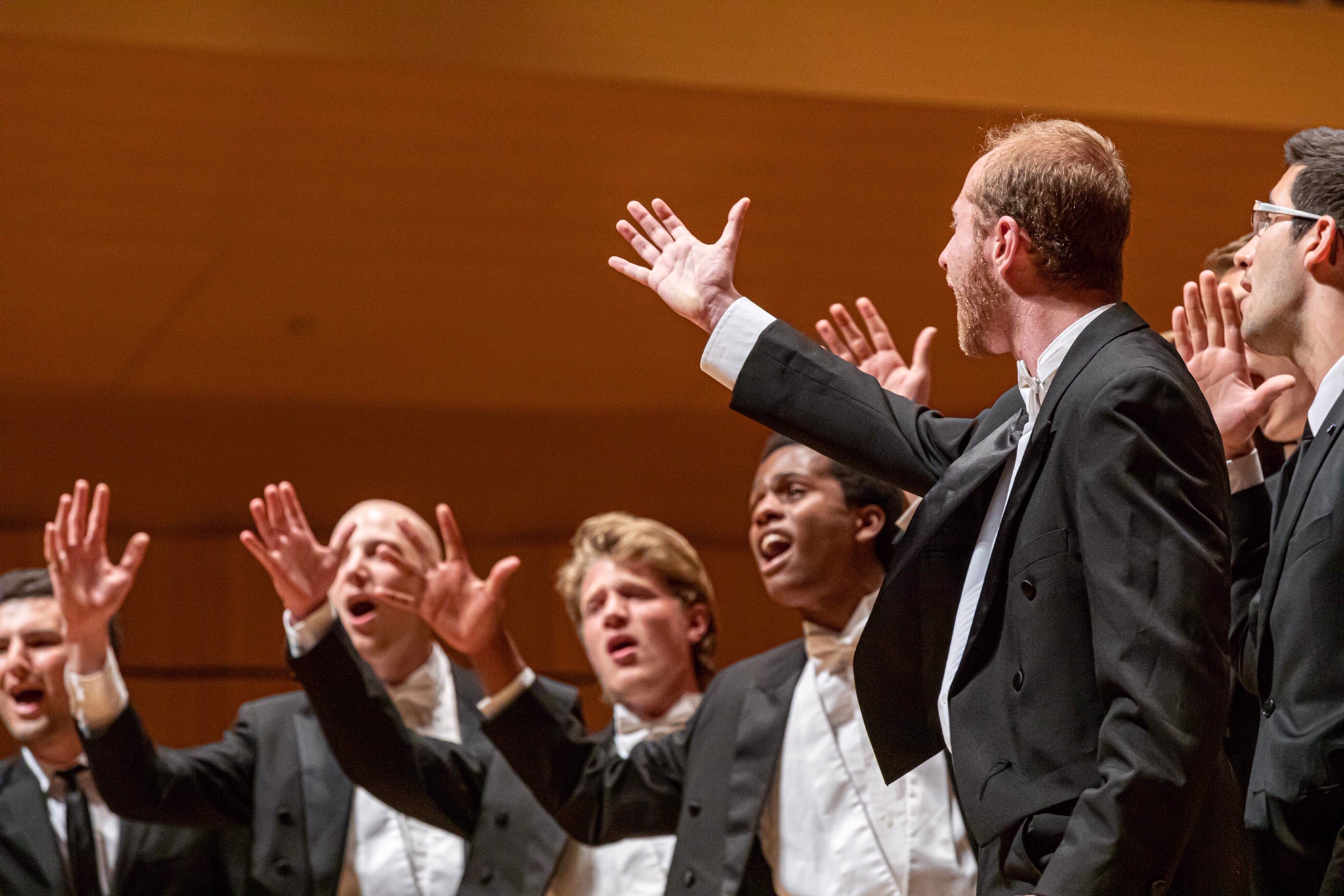 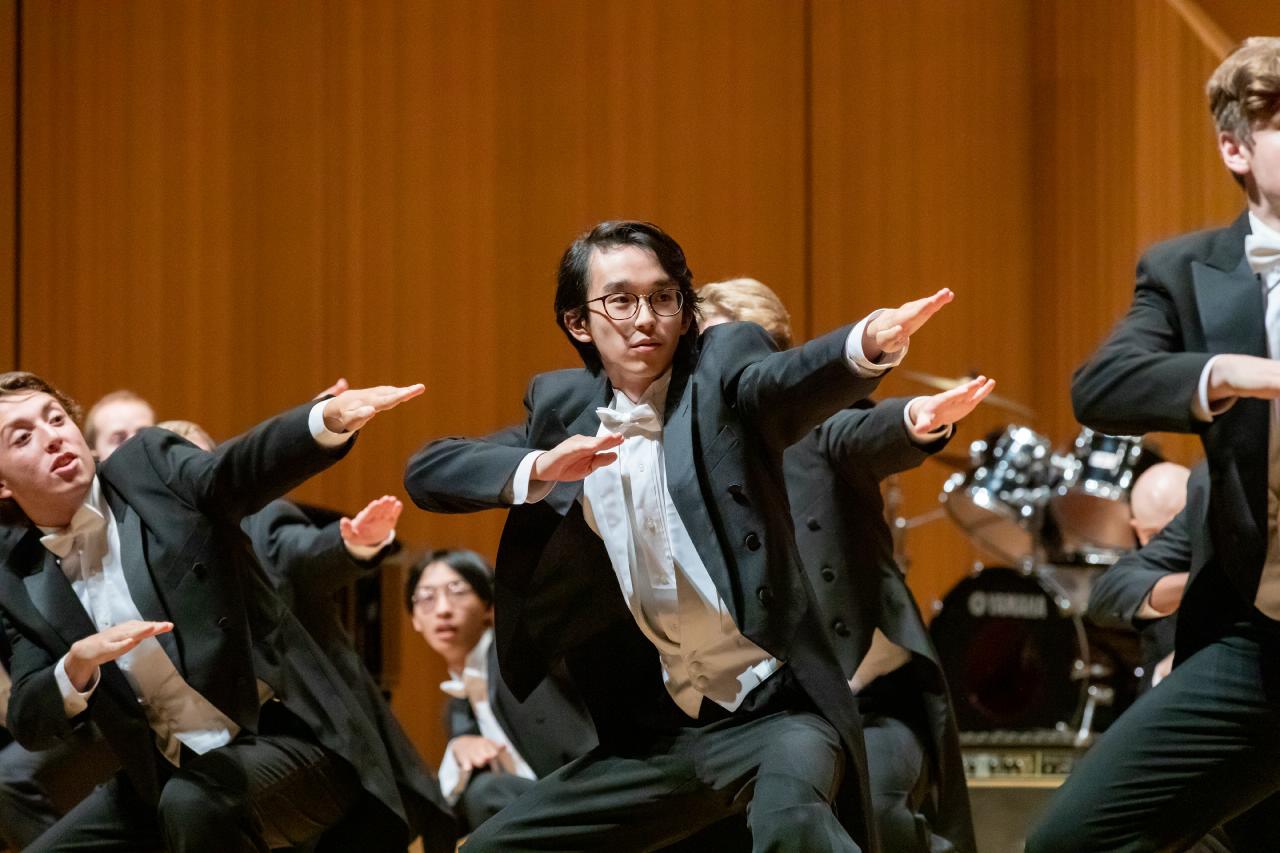 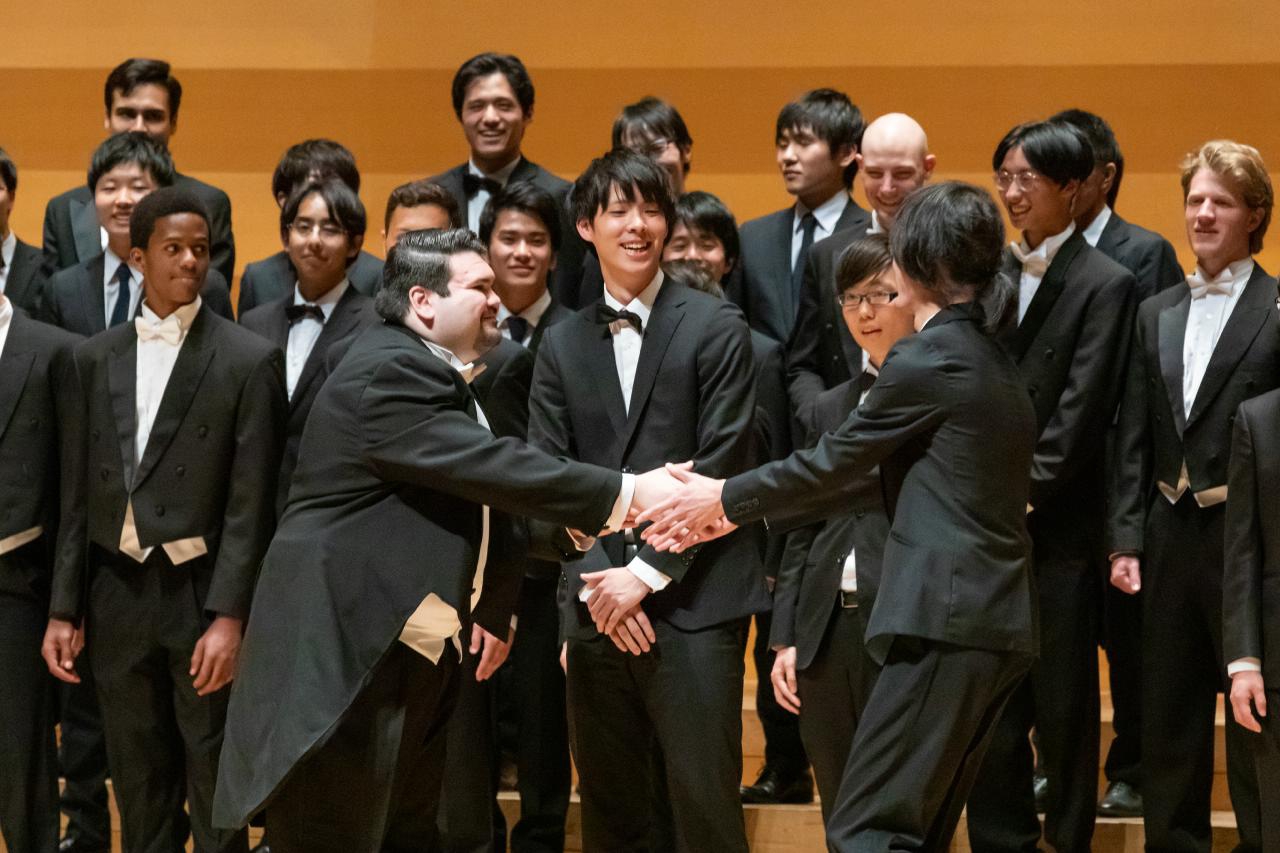 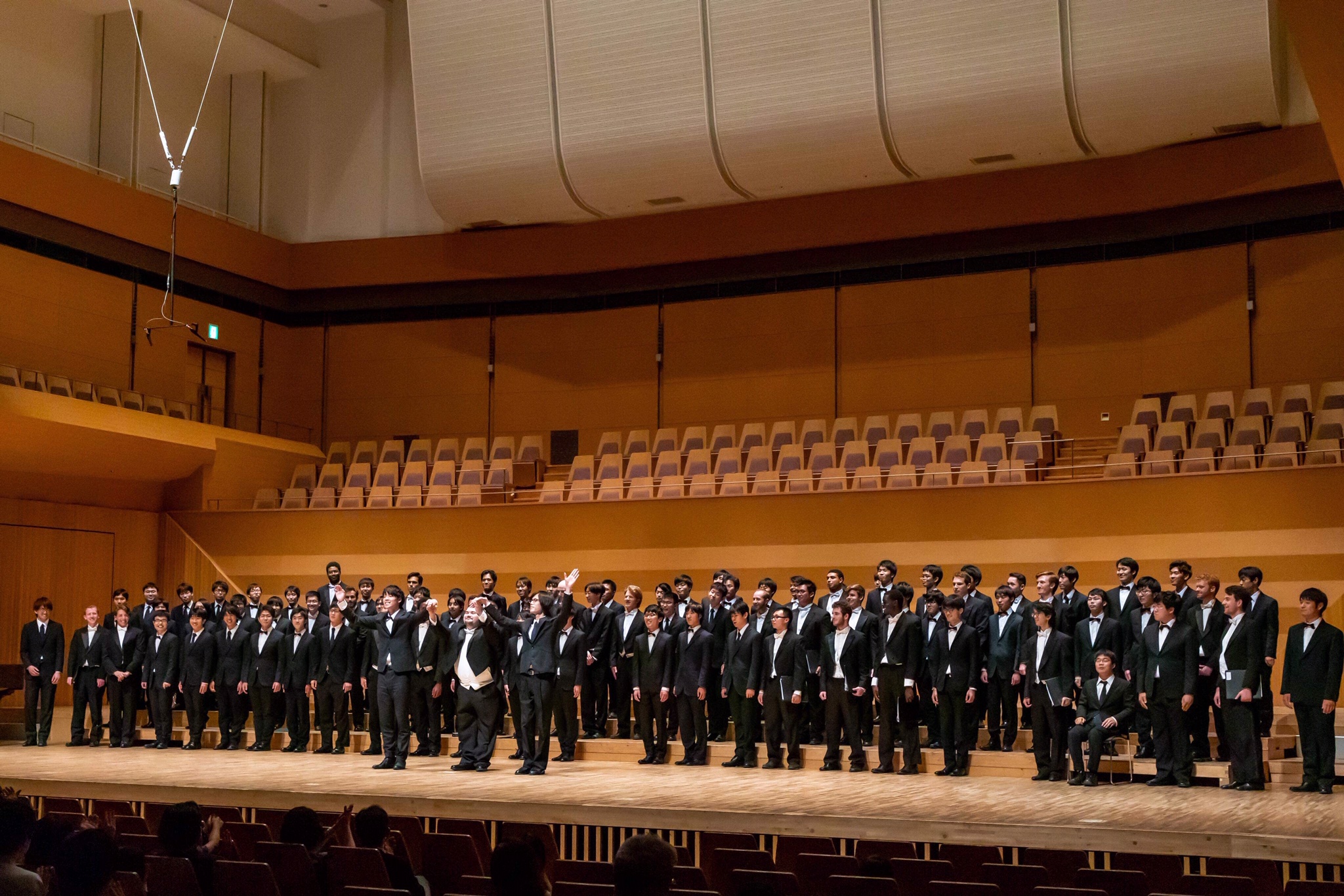 After the concert, one of Penn Glee club members said, " The concert was terrfiic.  First of all this concert hall is so nice in terms of sound, echo, ambience, etc.  We're honored to perform in such a nice hall.  Then, we're quite impressed with two Male Choirs' stunning performance.  I learned how supebr Japanese Male Choirs are."  Another member said, "In this Asian tour, we have never had a joint concert with a male choir and this was the first one.  I'm inspired by both Waseda and Keio male choirs.  I love Mogamigawa Funauta and would like to sing again!."  It was indeed great performance.