A panel of experts shared their thoughts on the two nation’s historic relationship on the eve of the Biden-Suga summit. 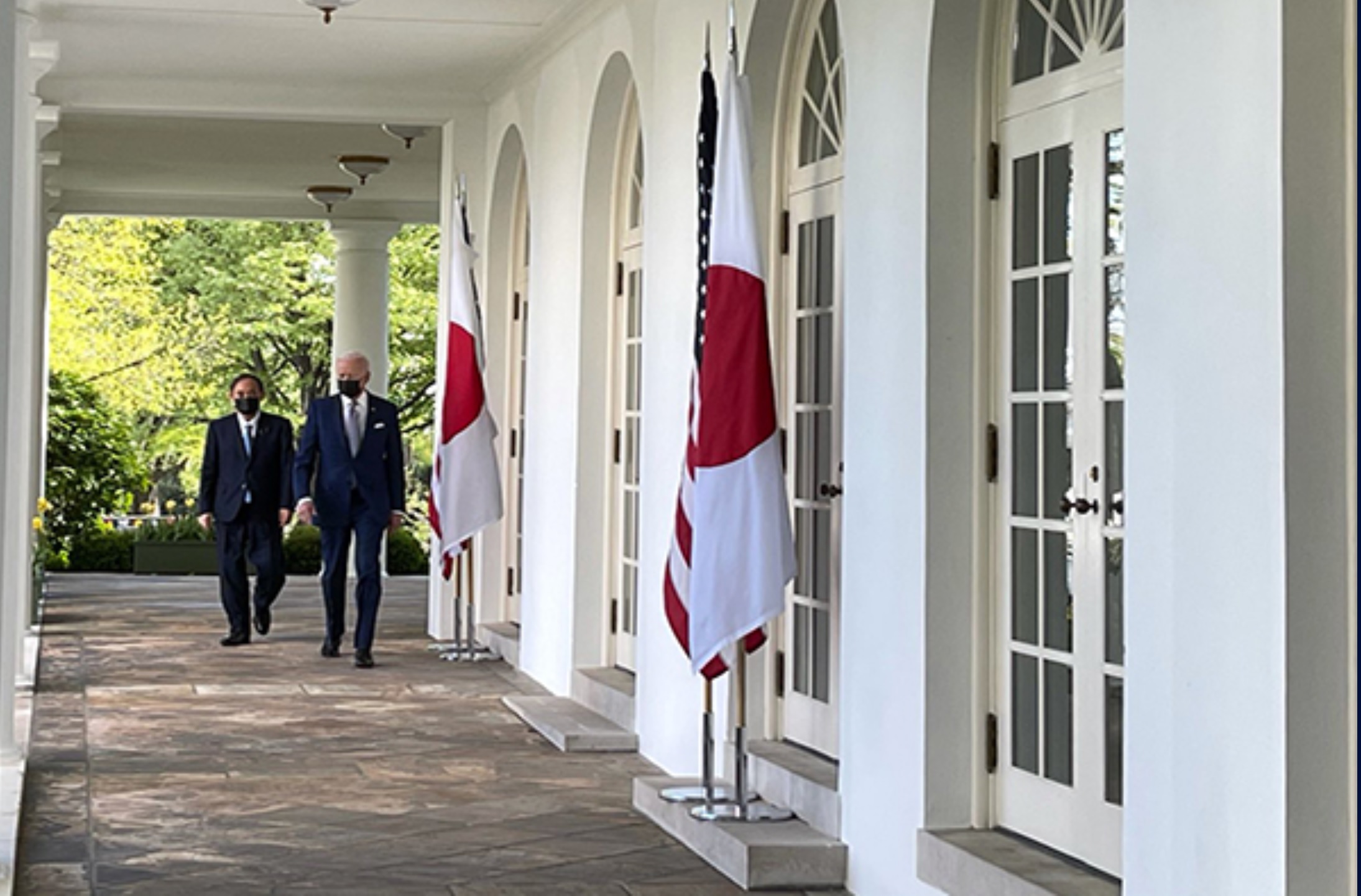 President Joseph R. Biden welcomed Japanese Prime Minister Yoshihide Suga as the first in-person foreign leader to visit the White House during his administration. The move highlighted the Biden administration’s commitment to Asia with the two nations presenting a united front in approaching China’s increasing influence, and in tackling issues like the pandemic, global warming, and technology development.

On the eve of the summit, Penn’s Center for East Asian Studies (CEAS) hosted a panel of experts on Japan’s relationship with the United States. The virtual event was co-sponsored by Perry World House.

The speakers included Kanji Yamanouchi, consul general of Japan in New York; Nobukatsu Kanehara, former assistant chief cabinet secretary to Prime Minister Shinzo Abe; Susan Elliott, president and CEO of the National Committee on American Foreign Policy and former ambassador to Tajikistan; and Joshua Walker, president and CEO of the Japan Society. The discussion, moderated by Frederick R. Dickinson, director of CEAS, covered the importance of China in both nations’ foreign policy strategies and the wide range of interests and values shared by that Japan and the U.S.

Kanehara gave a sweeping view of the current liberal international order and shared his historical understanding of the imperial view of the world that China has and why it is particularly important in this moment.

Relations between Japan and the U.S. have come a long way since the end of World War II, he said.

“We do share universal values today,” said Kanehara. “We are living in one single world where people can pursue his or her own happiness based upon his or her own conscience.”

The challenge for Biden and Suga is developing a strategy to engage China, Kanehara said, particularly because by 2030 China will be bigger than the United States in terms of economy.

Yamanouchi said he sees Suga’s invitation as the first foreign guest of the Biden White House as a meaningful symbol that was well-crafted and calculated to send a message. 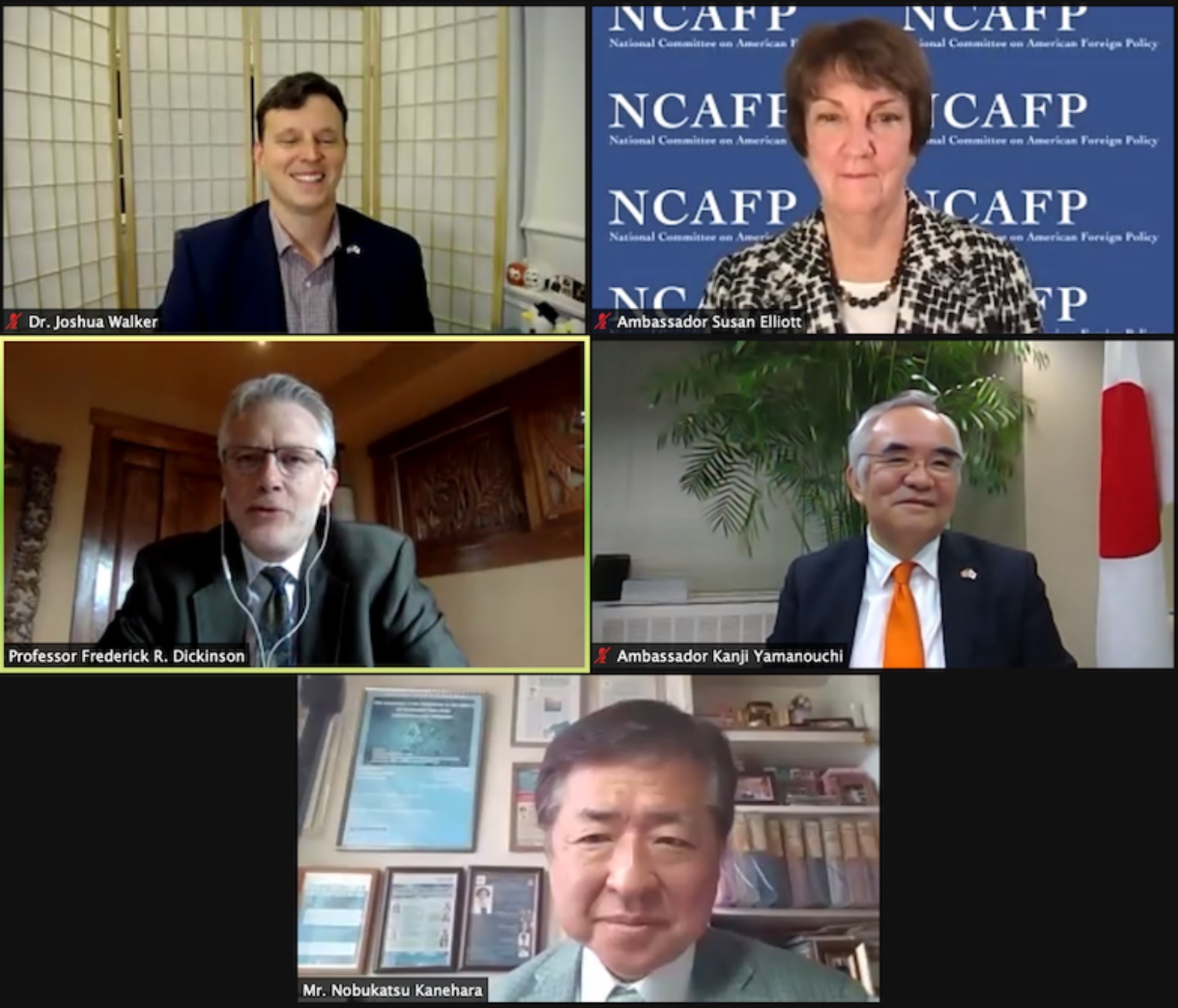 Traditionally, the first leaders who are invited to the White House would be from the United Kingdom or U.S. neighbors like Canada or Mexico, he said. But 12 years ago, when President Barack Obama took office, he chose Japan as the first nation to contact about foreign policy; and then-Secretary of State Hillary Clinton chose Japan as her first visit. Yamanouchi said he sees Biden’s decision to host Suga as following this same path.

He highlighted the values both countries share, like democracy, human rights, and a market economy and the strategic alliances between Japanese companies and U.S. companies, noting that Japan is the biggest investor to the United States.

The U.S. security role in Japan is also key to the relationship, he said.

“In March 2011, we were hit by triple disasters of earthquake, tsunami, and nuclear accident and U.S. forces helped rescue Japan as a country, and they rescued Japanese people. The Japanese people will never forget that,” he said.

Elliott discussed the two countries’ multilateral cooperation and touted the inclusion of India in planning for the region and alliance of “the quad” of the U.S., Japan, Australia, and India as a way to counter China’s influence.

Walker said he sees Biden and Suga as the caretakers of the legacy of the U.S.-Japan relationship, but they are also major players in what comes next.

“Our interests have never been more aligned, but it is not just the external environment that has forced us to this moment, including the role of an aggressive China, rogue states from North Korea to Iran, and what Russia is doing in the world,” he said.

Japan as the third largest economy has a lot more at stake right now. The relationship between the two countries can’t thrive on just two leaders and can’t simply be about personalities, said Walker.

“It has to be an ‘all of country’ approach. I think Americans are going through a unique moment where we find a lot of things about Japan appealing. In a world that seems so chaotic and unstable, there's an island of stability like Japan where things like Zen meditation, things like the tea ceremony, things like minimalism have emerged and seem to give us answers, ancient wisdom that applied to the modern era,” he said.

Walker said the historic relationship of America as the big brother and Japan as a little brother is a thing of the past. “We need each other more than ever,” he said. “American foreign policy cannot thrive without our allies.”

In wrapping up the discussion, Dickinson asked the panelists where they thought the relationship between the U.S. and Japan would be in 75 years. Turning the tables, Yamanouchi said he wanted to hear Dickinson’s take on the matter.

“I became a historian, so I wouldn’t have to predict the future,” Dickinson said. But he added that he thinks the U.S.-Japan alliance today is even more central and even stronger than most make it out to be, particularly in light of their connections going back to the 1920s.

“It seems to me the centrality of the U.S.-Japan relationship in terms of global affairs is even stronger than any of us think because of the political, economic, social, and cultural integration that goes at least as far back as the First World War,” he said.

<This article is cited from "Penn Today">